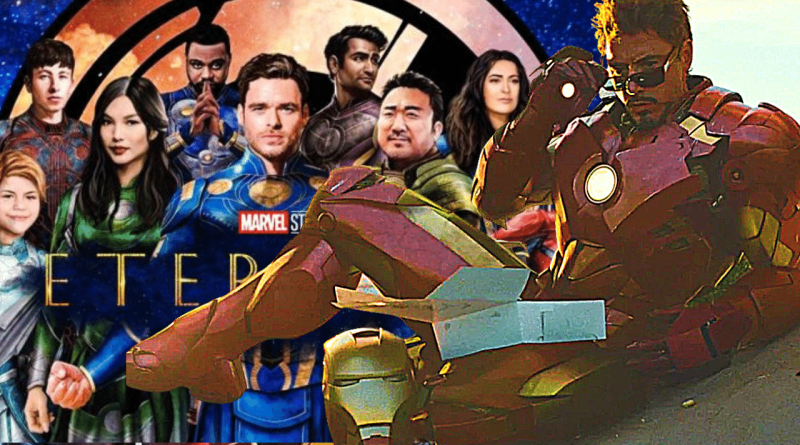 The recently released Eternals trailer hints that Iron man will not be replaced in MCU anytime soon. There was only one Iron man and always will be. It all started with him when he brought MCU’s first superhero in 2008. Iron man was the one who gave birth to the franchise with Iron man 2008.

Over the last decade, Marvel’s has created a bunch of amazing characters many of whom are very much capable of carrying their own film franchises and take them to new heights. Unfortunately, the death of Tony Stark left a huge cavity in Marvel Cinematic Universe, one that can never be filled.

As the Marvel Universe moves forward with its Phase 4 and many more upcoming projects, we feel Iron Man’s absence a lot more. It’s safe to say that Iron Man won’t be returning to MCU as it will potentially sabotage his sacrifice in Avengers: Endgame. Meanwhile, the possibility of someone else taking over as Iron Man, which will enable Marvel’s to bring back their topmost brand was dismissed as the Eternals trailer hints that this isn’t going to be the plan.

The trailer finishes off with a stinger that’s added for fun, but somehow plays a major role in implying the future of the Marvel Cinematic Universe. As the scene goes on, Sprite wonders who’ll be taking over the role of the leader of the team after the send-off of Captain America and Iron Man. It should be noted that they said Iron Man instead of Tony Stark. In the Eternals trailer, the Eternals seems to accept Sam Wilson as the new Captain America and they also know that there’s only one Iron Man that is Robert Jr Downey.

It’s obvious that there will be only one Iron man in the Marvel Cinematic Universe. Plus, Tony didn’t pick a successor to take his legacy forward like Steve Rogers who chose Sam Wilson to take over his role. However, it’s a very long journey and things might change as we move forward byt for now, the studio is comfortable retiring the Iron Man title followed by the death of Tony Stark.

Currently, there are no plans to honour Stark’s legacy in supplementary ways, be it Spiderman’s journey to grow into a true hero or the upcoming Disney+ series, Armour Wars starring James Rhodes. Marvel has many shows lined up for release in the future including Ironheart, the show is currently under development and it will star Dominique Thorne as Riri Williams, a teenager who will design her own advanced suit of armour.

These ways will ensure Tony Stark’s presence in the Marvel Cinematic Unvierse even after his death. He might play an important role in the story narration of these upcoming projects or might appear in flashbacks. By this, he can be a part of the Marvel Cinematic Universe, without indulging his character in anything too risky.

Tony Stark, Robert Jr Downey and Iron Man, these three identities are so connected that it would be hard for Marvel Studios to appoint someone as the new Iron Man and even if they manage to do so, I don’t think the fans are going to accept anybody else as Iron Man.

Besides, Robert Jr Downey has set the bar so high in the last decade, it’ll be difficult for someone new to reach up to that. Some of you might remember that this was a plot point in Spiderman: Far from home, where we saw Peter tormented by Tony’s shadow.

The chances are high that there may never be another Iron Man. Despite that, Marvel should be in a good place as they move forward with their future plans. Fortunately, having so many different characters is highly beneficial for them as they will never depend upon one or two characters to take their brand forward. Commonly, it is hard for a movie franchise to survive if their main character leaves, but this is the Marvel Cinematic Universe we are talking about. It has proven from time to time that there are always exceptions.

By now, Marvel Studios have made such a strong reputation for themselves that they do not need to depend on one character to survive. With many of their upcoming movies like Shang-Chi and the legend of the ten rings and the Eternals being ranked as 2021’s most anticipated films, Marvel’s have proved that they will thrive to their full extent, with or without Iron Man.