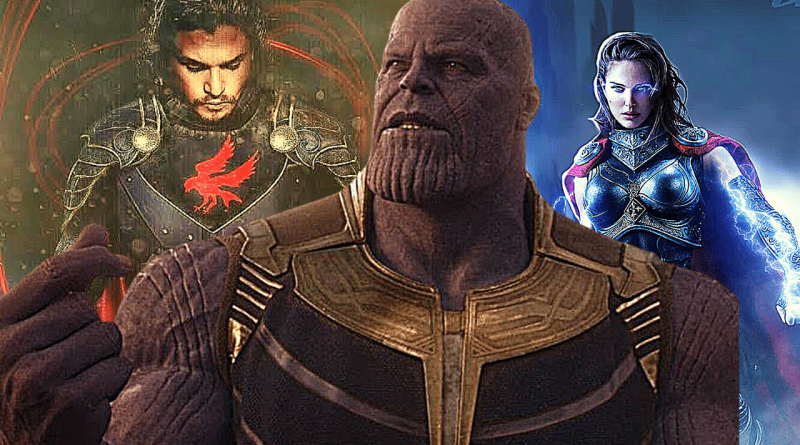 As Marvel Phase 4 embarks on a new journey, it is all set to introduce a bunch of strong characters who if were present during the infinity saga could have easily defeated Thanos and prevented the Thanos snap. These new characters are going to be as powerful as Thanos. Surprisingly, In Marvel’s ten years worth of movies, only a couple of superheroes came close to delivering a handful of blows to Thanos and even, they didn’t last for too long.

Even our almighty superheroes like Captain America, Guardians of the Galaxy, Spiderman, Ant-man and War Machine couldn’t match up to Thanos. Though The iron man gave Thanos a good fight with all his high tech weapons, he was left more bloodied than Thanos by the end of their fight. However, a couple of our superheroes proved that they could have won against Thanos including Thor, Captain Marvel and especially Scarlet Witch if her fight with Thanos would have continued.

However, these numbers for the characters strong enough to win over a villain like Thanos is going to rise in Marvel Phase 4. From what we have gathered so far, a bunch of characters will be introduced in Phase 4, all appearing in either Thor: love and Thunder or The Eternals. All these characters are worthy of beating supervillains like Thanos.

Being a normal human being with no actual superpowers, the odds of Black Knight losing against Thanos and dying a quick death are quite high. However, with his mystical sword enchanted by Merlin, which could cut through almost anything, it is worth noticing that he can possibly kill Thanos.

According to his comic book history, his sword can even cut through Iron man’s armour easily. Therefore, it is possible that he can kill Thanos as well, he just had to be fast enough to swing the sword at him. To defeat Thanos who easily survives punches from superheroes like Captain Marvel, Black Knight need to not make the same mistake that Thor made. As Thanos himself said, Go for the head.

For Dane Whitman, going into a fight with Thanos for even a little amount of time is not a good idea, while other characters from the Eternals can think about it. The comic book equivalent of Don lee’s Gilgamesh is one of the most powerful heroes ever to be included in The Avengers.

Even when he was blind, he was almost successful in beating Thor and wields such strength that’s almost equal to both the God of Thunder and Hercules. Moreover, being an Eternal, he wields a number of different abilities apart from his super strength.

Without a doubt, he can give Thanos one of the hardest fights of his life and there is a huge possibility that he could win over Thanos without any help from The Avengers or other Eternals.

Gore the God butcher is an alien warrior who is on a mission to get rid of all the gods from the entire universe. As a warrior who can execute Gods and is capable of defeating Thor without too much difficulty can easily fight with Thanos. The God Butcher is going to be a force to be reckoned with in the MCU.

There is no denying that the Eternals are among the strongest heroes in Marvel Comics and MCU, but It is also true that most of the Eternals would lose to Thanos in a one on one fight. However, if 2 members go against Thanos at one time then they can win.

Out of all the Eternals, Gilgamesh will use brutal force in the fight, while Sersi will take a different approach. As you know, all the Eternals have the power to manipulate matter but Sersi can do this on another level. She is capable of completely reshaping the molecules of any object she chooses. With this superpower, she can defeat Thanos within a few minutes.

According to Marvel Comics, in the 1990s, Thanos fought with Thor’s father, Odin. In the brutal showdown, Thanos was way more powerful than Odin but the king of Asgard was the one who had the upper hand throughout the fight. Thanos spend majority of the fight struggling against Odin’s godly powers.

Since the MCU counterparts of the said characters are exactly the same it appears that MCU’s Odin will win that fight 2. Therefore, Thor 4’s Zeus will be a tough competition to Thanos as Zeus is the Greek counterpart of Ordin and the skyfather to his own pantheon of gods. That’s why just like Odin it will be easy for Zeus to beat the strongest superheroes and supervillains of MCU.

After Thor and Captain America, Natalie Portman’s Jane foster will become the 3rd MCU character to wield Mjolnir in Thor: love and Thunder. After becoming the Mighty Thor, Jane will most probably share the same powers as Thor including his power over lightning, Asgardian powers, and super strength.

If she gets all these powers then she can definitely challenge Thanos for a one on one combat, just like Captain America in Avengers: endgame. It’s worth noting that both Steve and Thor could not defeat Thanos which is why it feels uncertain that Jane would defeat Thor but that doesn’t mean she can’t hold her ground against Thanos in a fight unlike majority of the MCU heroes.