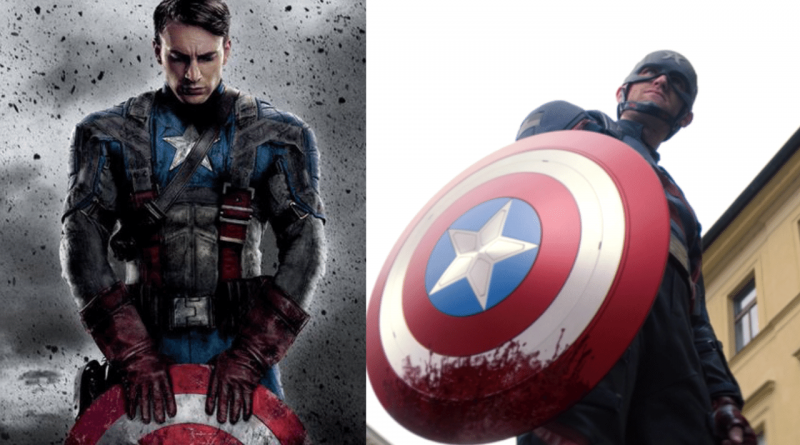 Wyatt Russell who portrays John Walker in the latest Disney+ show, Falcon and The Winter Soldier revealed in a recent interview with Marvel Today that Chris Evans’ Captain America shield was heavier than his shield.

In Endgame, Steve Rogers stepped down from the role of Captain America at the end when he returns after placing the infinity stones to their respective places where he heads back in time to reunite with the love of his life and decides to finally retire. He chose to hand over his shield to Sam Wilson aka Falcon to take his legacy forward.

Why did Sam Wilson handed over the shield?

However, In the first episode of Falcon and The Winter Soldier, Sam gave up the shield to the government before even officially accepting it. He thinks that the shield and the title belong to Steve only and he’s not worthy of them. Also, he knows that it’s not easy to carry the responsibilities of the shield. He knows what it takes to carry the shield especially when he’s been fighting alongside Captain America for years now. It’s a lot to deal with and he’s not just ready yet. Although, he handed it over to put the shield on display to honour Captain America. Well, that didn’t happen.

After Sam returned the shield, the U.S. government appointed a soldier named John Walker to acquire the Captain America shield. This surprise decision left Sam feeling blindsided and betrayed. Walker is appointed to fulfil the role of Captain America because of his excellence on the battlefield and his overall expertise.

Is John Walker and Steve Rogers the same?

Talking about John Walker, Steve and John have a somewhat similar physique. Although, Walker hadn’t been given any special super-strength serum before accepting the role like Captain America. They have a lot of differences both in the real and reel world.

During a Q&A session that allowed fans to ask questions through their Twitter accounts, Wyatt Russell revealed that he is a totally different person in real life from the character that he’s playing in the show. When a fan put forward a question to describe the show in three words, he said that it’s exciting, action-packed and human. We couldn’t agree more with that statement.

However, within the world of the show, Captain America and Walker worked with the same shield. But there’s a huge difference in the personalities of both the characters and it can be seen by the end of the fourth episode of the show. In the episode, Walker commits a crime that makes him the opposite of Captain America, he goes against everything Captain Steve Rogers ever stood for and as we know Captain America was a man of principles.

An epic finale for Falcon and The Winter Soldier

Later on, In the fifth episode, Walker is forced to face the consequences of the crime he committed. Meanwhile, Falcon and Winter Soldier certainly have their plates full right now. From trying to help Falcon’s family finances to facing Flag-smashers leader, Karli Morgenthau and stopping her.

Who’s the new MCU villain in Falcon and The Winter Soldier?

Karli Morgenthau, an anarchist and anti-patriot, also known as the Flag-smasher who leads a group with the same name. The group is introduced in the first episode of Falcon and The Winter Soldier when Joaquin Torres, Sam’s military sidekick informs him about the group. He exposes how the group works, gathers, masks up and obscure crimes committed by the group’s supervision. Many members of the group possess superpowers like extraordinary strength and durability. The group including their leader sports a black mask with a red handprint on it.

The leader of the flag-smashers, Karli Morgenthau, wants the world to retreat to the way it was before Hulk’s snap which brought back half of the population erased by Thanos. That’s why Sam and Bucky had to stop them.

After the fifth episode that ended on a nail-biter, Falcon and The Winter Soldier has promised fans an epic finale. The leader of the flag-smasher has planned her final move and Falcon has doubled up his training. Also, he has learned one of Captain America’s original moves.

There’s one more thing to be excited about. Sam has opened up a special package which he received from the people of Wakanda. We don’t know what’s inside the box for now. But we are sure of one thing that whatever it is in the box, it’s going to help him beat Morgenthau and her group of super-soldiers.

Though we are always going to miss our beloved Captain it’s indeed time for some new heroes to enter Marvel Cinematic Universe. We just hope they are able to reach the bars that our favourite superheroes have set.