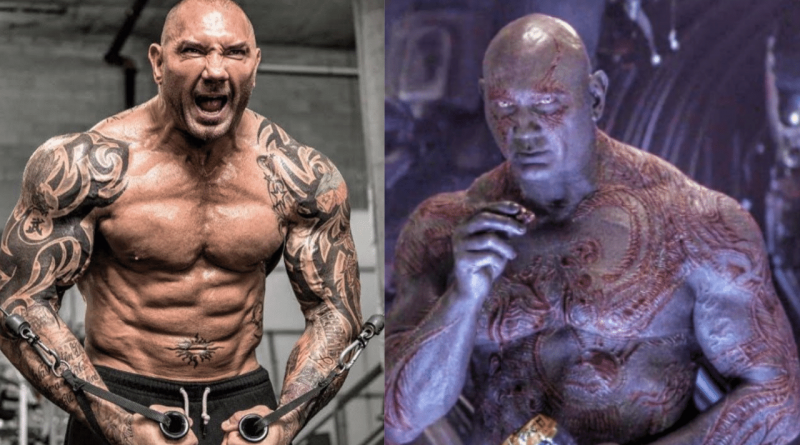 Dave Bautista played the role of Drax the Destroyer in the Guardians of the Galaxy. He started his Marvel journey in 2014. Drax the Destroyer was a Kylosian intergalactic criminal who later becomes one of the Guardians of the Galaxy. He was determined to have his revenge on Ronan the Accuser who killed his wife and daughter and destroyed his home as well.

After becoming allies with the rest of the Guardians, Drax goes on several adventurous missions and battles. Later on, they joined the Avengers in their battle to defeat Thanos but they couldn’t stop him and he performs the snap. Drax was one of the victims of the snap. However, he was brought back by Hulk with the rest of the disappeared population.

Bautista’s retirement from the world of wrestling

In 2019, he went back to WWE to face former Evolution stablemate, Triple H at WrestleMania 35. However, the actor has said that he’s done with WWE after he finished off his career on his terms.

Talking at Zack Snyder’s Justice Con, Bautista disclosed that he would never go back to wrestling or WWE so that his retirement remains intact. He added that it is extremely difficult to convince people that he’s fully retired and won’t be going back to wrestling. The discussion is pretty hard for him.

He claimed that when professional wrestlers quit, they don’t exactly quit. They sort of quit but when they are offered something with a big paycheque or the event is pretty big, they come out of retirement.

However, that’s not the way with Dave. He is confident about his decision to retire from wrestling. He believes that he exited the business in such a storybook way and he wouldn’t ruin that by going back. Dave admitted that he would never step back from his decision and he’s done with it. He’s happy to leave the business on his own terms and nothing is going to change that.

In 2019, WWE announced that Bautista’s name would be added to the WWE Hall of Fame, as a part of the class of 2020. However, Due to the rise of Covid-19, the ceremony couldn’t take place and the class of 2020 was ultimately instated this year during WrestleMania weekend.

Later on, Bautista’s name was removed from the list of the selected. Afterwards, he explained that his installation was being held back till the fans were able to attend the event. Also, he expressed his sorrow that he won’t be a part of the WWE HOF this year in a tweet.

In another tweet, he told his fans that he requested the WWE to instate him at a future ceremony so that he can thank his fans and people who made his career successful properly.

Despite having a shaky relationship with Marvel Studios his love for his character is never-ending. He also pushed and fought for a standalone movie for Drax the destroyer. He believes that the character has a beautiful story and it’s overlooked. He also thinks that fans will love his story. However, he says it never going to happen.

With this, Drax the destroyer will be seen in upcoming projects. Drax will return to the Marvel Cinematic Universe with Guardians of Galaxy Vol.3 directed by James Gunn. Dave will also be seen in the upcoming movie Thor: Love and Thunder directed by Taika Waititi. The movie is set to be released on 6 May 2022. He will also reprise his role in The Guardians of the Galaxy holiday special

Apart from the Marvel projects, Dave has many other projects scheduled. He will be featured in The Army of the Dead starring Ella Purnell, Omari Hardwick, Ana de la Reguera, Theo Rossi,  Matthias Schweighöfer, Nora Arnezeder,  Hiroyuki Sanada,  Raúl Castillo, Huma Qureshi and Garret Dillahunt. The film is directed by Zack Snyder. It is set to be released on May 21, 2020.

Dave has many other upcoming projects like Dune portraying Glossu Rabban. He will be seen as a vicious brute of a man, making Dave Bautista, based on his physique alone, a perfect choice to play this majestic character. It may a different sight for fans to see Dave Bautista in a role that is very much the opposite of Drax, but Bautista has proved his worth to be a versatile actor so he can clearly perform the role very well.

Well, we hope to see more of our favourite WWE superstar in the near future and we can assure you that you won’t be disappointed.