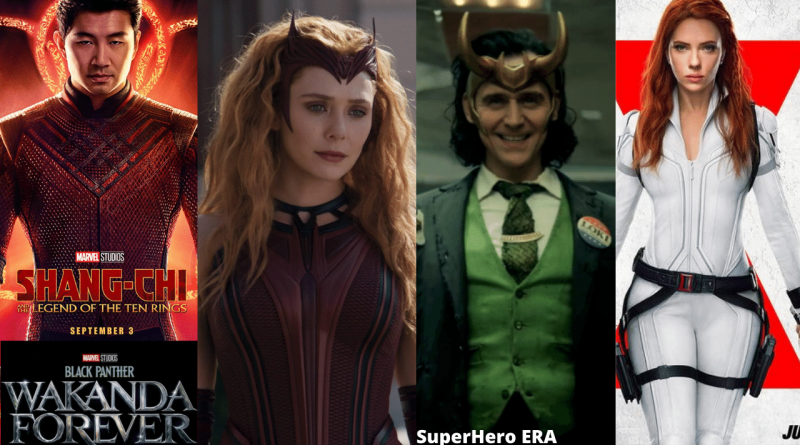 Recently, Marvel Studios released an MCU Phase 4 movie trailer which included new footage, titles, and confirmed the final release dates for upcoming Phase 4 movies. Marvel’s Phase 4 begin with the release of WandaVision followed by the Falcon and The Winter Soldier. Their small screen releases helped in setting up this stage for the big screen movies like Black Panther 2, Shang-Chi and the legend of the ten rings, Black Widow and a couple more.

Just like many other big studios, Marvel Studios also had to postpone the schedule of Phase 4 because of the COVID-19 pandemic. After sitting out for almost a year, Marvel Studios are ready to come back with a bang. Given the success of  WandaVision and The Falcon and The Winter Soldier, it’s safe to say that MCU is ready to have a fantastic 2021.

MCU Phase 4: Upcoming movies including Black Widow, Black Panther 2 and Shang-Chi and the legends of the ten rings

Now for the big screen, Marvel studio has a packed release schedule with Black Widow coming out in July, Shang-Chi and the legend of the ten rings in September, Eternals and Sony’s Spiderman: No Way Home in November.

Even after 2021, Marvel Studios have plenty of shows and movies lined up for release on Disney+ and in theatres as well. Currently, these shows and movies are under development and will be wrapped as soon as possible.

Though some of these movies and shows were announced in 2019 when Marvel’s first disclosed their plans for Phase 4, others like Ant-man and The Wasp’s: Quantumania were announced later.

Moreover, the video confirmed the titles of Black Panther 2 and Captain Marvel sequel, the former titled Black Panther: Wakanda Forever and the latter titled The Marvels. Further, the video confirmed the release dates of two upcoming movies – Ant-man 3 scheduled to be released on Feb 17, 2023, and Guardians of the Galaxy Volume 3 set to hit the big screen on 5 May 2023.

Due to the COVID-19 pandemic, lockdowns were imposed all over the world which resulted in the shutting down of the filming of various projects. Affected by the shutdown, the whole movie industry faced a lot of obstacles in the last year, which inflicted some changes in the release schedule. Similarly, Marvel studios also made some changes in Phase 4 but it was mainly reshuffling the order of the release.

Though Marvel’s head Kevin Feige said that the change in the order doesn’t affect the storyline as much but one such change was noted when Julia Louis-Dreyfus’ MCU character who was supposed to make a debut in Black Widow appeared in The Falcon and The Winter Soldier first.

However, that is a pretty minor change compared to the Shang-Chi and the legends of the ten rings and Eternals switching places on the release schedule so that it can come out after the release of Black Widow. Apart from this, there are no other changes in the release schedule. With this new information like the title of Black Panther 2, it’s clear that Marvel Studios is back on track with full dedication.

Most of the information like titles and release date of the movies, covers up the sequels in Phase 4, publicizing the films that feature already established, loved and popular characters of the Marvel Cinematic Universe.

The Marvels is possibly one of the most exciting entries in Phase 4 as it will not only feature the return of Captain Marvel but go on with the stories of Monica Rambeau played by Teyonah Parris and Kamala Khan played by Iman Vellani, former introduced in WandaVision and later will make her debut in Ms Marvels. The trailer gave a glimpse of their logos coming to be a part of Captain Marvel’s in the title.

Coupled with the Eternals first footage and the incorporation of MCU’s Fantastic Four logo, there are many new elements in MCU Phase 4 to look forward to. Moreover, with Black Panther 2, Ant-man and The Wasp’s: Quantumania and Guardians of the Galaxy Volume 3, Marvel Cinematic Universe has a roller coaster ride planned for Phase 4 and without a doubt, it’s going to be the ride of our lives.