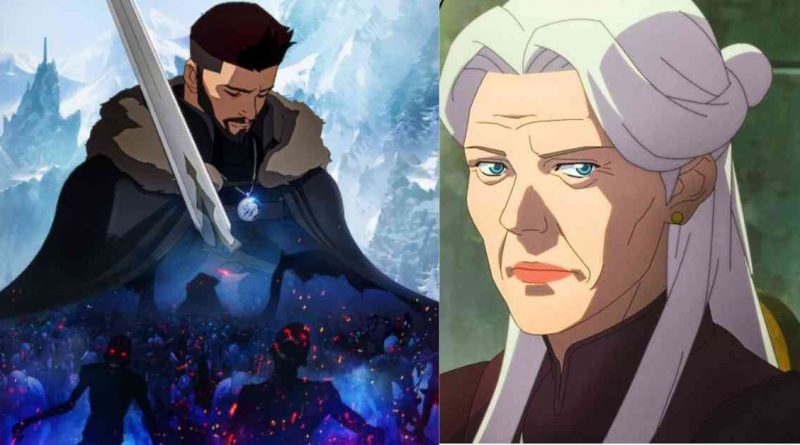 Nightmare of The Wolf tells about Vesemir’s backstory

The animated prequel revolves around Vesemir, played by Theo James, and Illyana, played by Mary McDonnell, as they try to drive through the fantasy world, they live in. Vesemir is also a Witcher who was shaped to become a trained Monster Hunter from a very young age.

However, he leaves his life as a slave behind, along with his childhood lover, Illyana, to become a Witcher and crave money. While leaving, Vesemir promises Illyana to make her a mansion by the lake once he earns enough money by becoming one of the best Witcher. But Illyana refuses to accept his proposal.

After the Kaer morhen is destroyed and Illyana dies, Vesemir is the last living member of his order. He is responsible for training a class of children, including Henry Cavill’s Geralt of rivia.

In a flashback where Vesemir and Illyana’s love story was featured, Vesemir meets an older woman named Lady Zerbst when he is arrested for murder. Later on, the lady is revealed as Illyana despite the considerable age gap between the two females. Then comes the twist, which was quite shocking.

How is Lady Zerbst and Illyana the same?

It was revealed that because of their magical mutations, Witchers age relatively slow in comparison with humans. This new revelation may complicate many elements of the current track, including the flashbacks and timelines for Witcher. However, it also explains how that older woman was Illyana while Vesemir was still young when he left everything behind.

The animated prequel to The Witcher series has been full of dark surprises, but the truth about Lady Zerbst and Illyana being the same woman was the best and saddest twist so far. It also showed the downsides of becoming a Witcher and the life that Vesemir left behind. This plot twist also offers a better understanding of Vesemir’s character as to why he is so obsessed with wealth and his apparent dislike for children.

Upon meeting with Vesemir, Illyana tells him about her life, including her late husband, children, and family. After Illyana is done recalling her past life, it creates an image of the life that Vesemir and Illyana never got to live together. It helped explain why Vesemir hated training the Witchers, the reason being the children reminding him of his childhood and what he could have done with it.