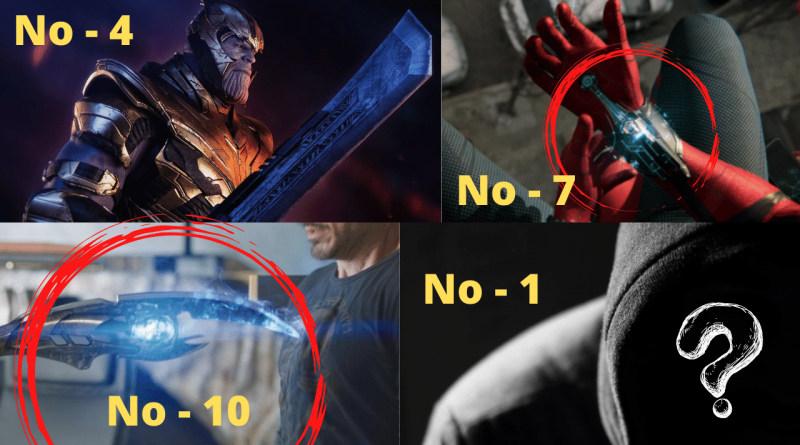 Have you ever seen a superhero without a weapon? Well, the answer is simple. No. It doesn’t matter how much power a superhero has he’s incomplete without his signature weapon. From Iron man and his armour to Thor and his hammer, a weapon is what makes a hero a superhero. Let’s have a look on some of the most powerful weapons in the Marvel Cinematic Universe.

Loki’s sceptre got its power from the mind stone and tesseract. The weapon has been used many times in the MCU. It could throw energy blasts and control the minds of anyone. It also had a blade at its front with which he killed SHIELD agent, Phil Coulson in The Avengers.

Besides this, Hydra also used this sceptre to perform experiments on Wanda and Quicksilver in Avengers: Age of Ultron. Tony also used it for inventing Ultron. In The Avengers, the same sceptre was used to close the space portal in the end.

The Eye of Aggamoto is a special weapon of Sorcerer Supreme which allows them to manipulate time. It channels power from the Time stone. It has been used at very important moments in the MCU.

Black Panther’s suit is made up of Marvel Universe’s strongest metal, Vibranium.  The Wakandan technology used in it makes it cooler. Just like Tony Stark’s nano-tech suit, Black panther’s suit also forms around his body within a few seconds. This suit can survive almost any attack. Also, it can store the kinetic energy from attacks and use it to strike opponents.

Spiderman’s shooters are one of the coolest weapons in MCU. With the help of these shooters, he throws web and these webs are so strong that they can even control Hulk. After Spiderman: Homecoming, Tony Stark took his shooters to another level with his technology. Although there is a drawback to these shooters, they are limited.

With no doubt, Thor’s hammer, Mjolnir is one of the most popular weapons in MCU. Before Thor: Ragnarok, Mjolnir had no competition until Hela broke it off like it was nothing. With Mjolnir, Thor used his thunder powers and attacked enemies. Not everyone can use Mjolnir, only those who are worthy of it can hold it. This was proved in Endgame when Captain picks it up in the last fight against Thanos.

Captain’s shield is said to be even more popular than Mjolnir because it is the only weapon in MCU which can survive a blow from Thor’s hammer. It is made up of Vibranium which doesn’t follow Newton’s law but is important to Captain America. The shield was known to be indestructible until Endgame where Thanos thrashes it with his double-sided sword.

This weapon in MCU broke the strongest metal of MCU which is Vibranium. With his sword, Thanos fought with the mightiest Avengers without the infinity gauntlet in the Endgame. The sword survived Tony’s lightning blast and Thor’s Mjolnir and Stormbreaker. At last, The Scarlet witch destroyed it during her face-off with Thanos.

We don’t need to tell you about the power of Iron man’s armour. The armour is not just a weapon but a collection of hyper-tech weapons. Tony’s armour is so strong that it can put up a fight with any weapon in the MCU. With the help of his armour, he has fought even the strongest avengers like Thor, Hulk and Captain America. In the Endgame, if it wasn’t for his armour the avengers couldn’t have taken the stones from Thanos.

The Stormbreaker is the most powerful weapon of the king of Asgard. He not only uses it for thunder attacks but also for Bifrost. In Endgame, Thor chopped off Thanos’ head with Stormbreaker. Also, In the infinity war, it took the attack of six infinity stones without a single scratch. Later on, it was clarified that before attacking Thanos didn’t analyse the power of Stormbreaker.

Infinity stones are the most powerful weapon in the MCU because many of the superheroes got their powers from these stones. The infinity stones are strong individually but when combined altogether they can erase the entire universe or create a new universe. These stones are so powerful that not everyone can use them. A person with immense power can use it only. Even Thanos nearly killed after using these stones for the second time.

Well, these are all the powerful weapons in MCU. We hope you liked it. Do tell us your favourite weapon in the comments section.