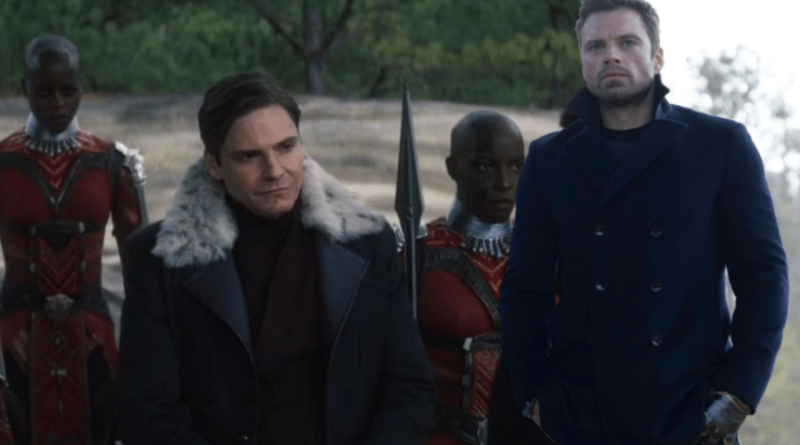 Baren Zemo who made his way back to the Marvel Cinematic Universe is now officially under Wakandan custody. There’s a suspicion that his capture could lead to the falcon and winter soldier’s Thunderbolts. Ever since he returned to the Marvel Cinematic Universe with the Falcon and the Winter Soldier, he has made a somewhat good image for himself in the eyes of the audience. Well, the same couldn’t be said for the Marvel superheroes.

After being brought out of jail by none other than the winter soldier, Zemo’s wealth and resources have proved to be a valuable asset in chasing the source of the super-soldier serum but his freedom is not going to last long.

Also, it’s hard to forget Zemo’s offensive behavior in Captain America: The Civil war. Sam Wilson assures him that he’ll be back in his cell as soon as the mission is over. On the other hand, the folks of Wakanda are desperate to see Zemo behind the bars again as he is the one who planned the murder of their king. To keep an eye on Zemo, a team of Dora Milaje led by Ayo is sent to make sure Zemo doesn’t escape.

Last week on the Falcon and the Winter soldier, we saw Zemo trying to sneak out while the others were busy fighting off the bad guys but his attempt to flee fails. as Bucky sticks to his promise, he neither freed zemo nor killed him and leads the Dora Milaje straight to him. Ayo says to bucky that Zemo will live the rest of his life behind the bars just when Zemo is walking into the sunset with a Dora Milaje guard.

Is zemo being imprisoned in The Raft?

According to Marvel’s vast comic book knowledge, the raft is a SHIELD prison designed for criminals and rebels with superpowers and troublesome abilities that an ordinary prison couldn’t take care of. the raft resides at the coast of new york.

The Raft is comparable to nearby Ryker’s Island which is completely encircled by water to making it impossible to escape. Some special measures have been taken to keep a leash on the supervillains like energy dampening and force fields, biometric weapons for guards, poisonous jellyfish swimming the perimeter, and whatnot.

Despite all of that, there have been many successful escapes over the years as well as the occasional explosions. Super baddies like Doctor doom, Loki, Green Goblin have been the prisoners of the raft. Our favorite superheroes and good guys interact straight with the Raft to get these evildoers off the street without resorting to deadly force as it also causes chaos for the civilians.

Has the raft made an appearance in the mcu before?

Although, the raft was first seen in MCU in Captain America: Civil war it has existed even before that. Just like its comic equivalent, it was situated in the Atlantic ocean surrounded by water.

The movie showed that the raft actually sits underwater and emerges out only when there are visitors. just as in the comics the raft is a specially designed prison for supervillains with isolated imprisonment for up to 23 hours a day and that’s the sole reason why Clint Barton takes such demurral to be bolted up there.

Fans got their first close-up look of the raft after the Avengers Sokovia bestows falling out when Wanda, Clint, Scott, and Sam are locked up there for deception. Honestly, the raft from the movie and the raft from the comics are equally vulnerable to escapes. Not alone does Tony break out the raft’s surveillance gear with just his watch, but before Captain America: Civil War comes to an end, Cap has already broken into the prison and successfully released his friends.

What does the raft have to do with Zemo’s thunderbolts?

When Ayo intentionally stipulates Zemo’s future, it sure left the fans in a state of curiosity. We all know that he didn’t come from the raft, it was somewhat a normal-styled prison in Germany. Well, it doesn’t matter anymore because he’s not going back there anymore. Ayo assures that zemo is in for lifelong imprisonment. The change of prison hints at a significant move towards launching Zemo’s Thunderbolts to the MCU.

In Marvel comics, Zemo makes a new team of redeemed heroes called the Thunderbolts. However, Zemo’s teammates become genuine heroes when they are saving the world in the absence of the avengers and refuse to go back to the dark side when Zemo asks them to. That’s why Zemo’s shift to the raft links all the pieces together as there he will have access to many supervillains who are also anti-superhero like him but still wants to protect the common man.

The Falcon and the Winter soldier has already set up the base for the Thunderbolts. Aside from being ridiculously rich, Zemo seems to be a little less villain lately. As the US government is looking for new superheroes, Will they persuade Zemo to form the Thunderbolts and become the new superheroes of the town?